Activities in the field of AI: retrospective 2020:
Introduction
×
Sign-up
Alana for innovation

Activities in the field of AI: retrospective 2020

Under the COVID-19 pandemic, the world suddenly had to deal with an acceleration in the use of everything related to the digital and it was… 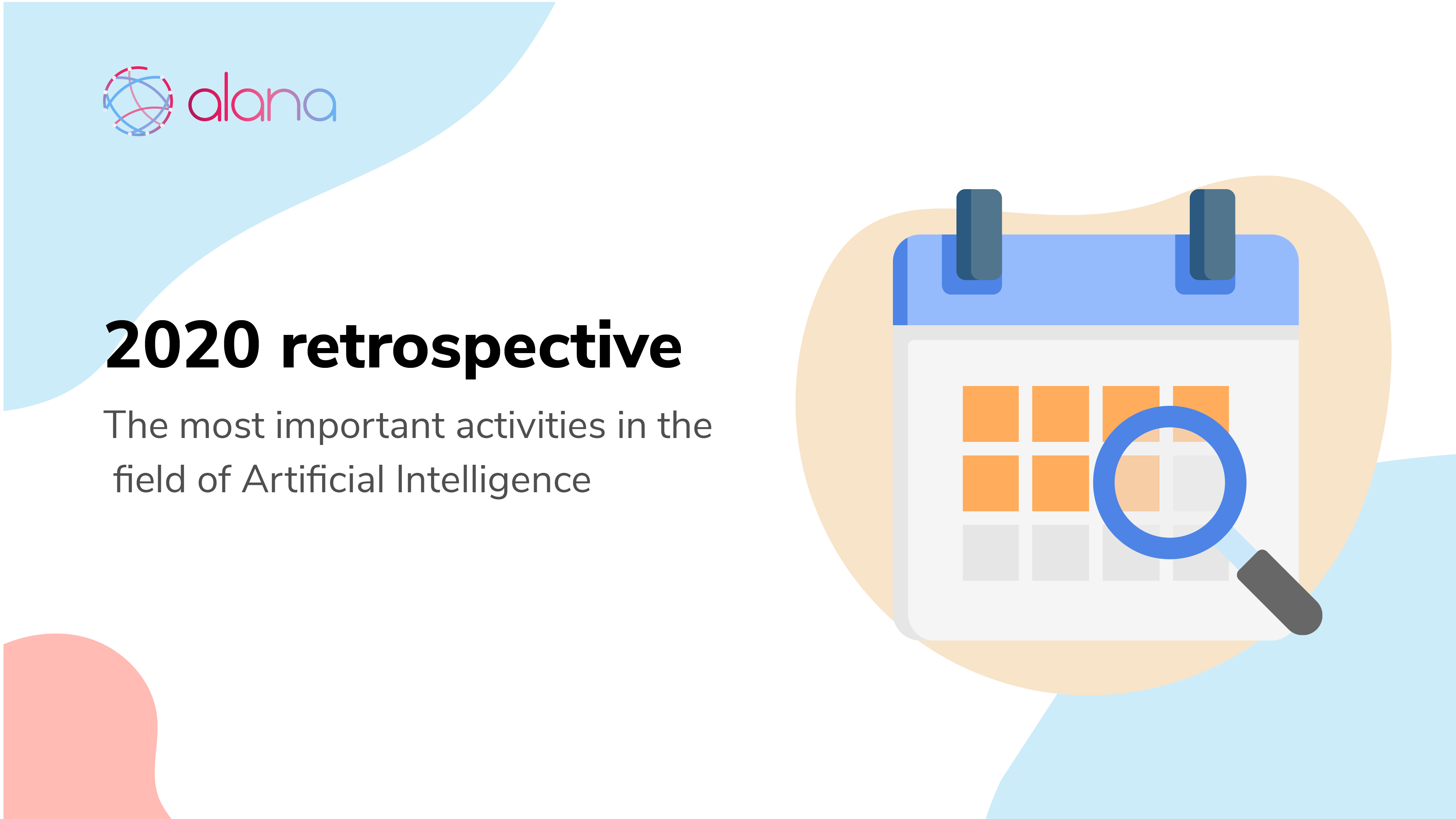 Under the COVID-19 pandemic, the world suddenly had to deal with an acceleration in the use of everything related to the digital and it was necessary to adjust the tools we have in our hands.

Having that in mind, the insight into what can be developed and improved became more refined, and artificial intelligence was one of the fields that most developed relevance in 2020.

According to Google Trends, the term artificial intelligence gained more significance in 2020, there was an increase of 30% in the average of searches for the term when compared to the year 2019.

A research conducted with 2.395 companies in different regions found out that 50% of them have adopted IA in at least one area, although they are not in different areas of those used in 2019, such as:

According to Crunchbase, the AI sector in the United States received more than US $7 billion in new investments, with some companies leading the trend. NVDIA, for example, took advantage of the boom in artificial intelligence field – what was one of the major responsible for the growth of the company in 2020 – to increase the quality of the graphics cards used in rendering video games, in addition to investigating the universe of autonomous cars.

Other companies such as Micron Technology, which works in the branch of memory cards, are also using artificial intelligence in their benefit, since the demand for these objects in higher memory quality and quantity only tends as time goes by. In a world where phones use AI to produce more enhanced images, like the new generations of the iPhone, the industry tends to develop gradually.

IDC predicts that global spending on AI will double in up to four years, reaching $110 billion by 2024, due to the need for companies to adapt to the new market needs and under the premise that artificial intelligence makes work far more agile and innovative.

Reading Recommendation: Artificial intelligence and the future of communication

Companies like Google, Microsoft and Facebook are on the top of the ranking when we talk about companies that invest the most in AI, and coincidentally, they are also the ones that  most buy small artificial intelligence startups, once  these  tend to have a very specialized workforce, but they lack money in order to carry out their projects.

One of the greatest progress in the world of IA in 2020 was GPT-3, developed by Open AI, based in machine learning, it consists of the development of a third generation prediction model to produce texts identical to the ones created by humans.

It is the most powerful sort of language ever developed, due to its size: it has 175 billion parameters. In order to have an idea, its predecessor GPT-2 had 1,5 billion of parameters. Due to the constant feeding of textual references in the database, the GPT-3 is capable of recognizing and creating the most varied types of texts, a landmark in the history of artificial intelligence.

This subject was also addressed in our podcast “Challenges of artificial intelligence in the communication” of Ploomes with participation of head of design and partner of the Alana AI, Marcel Rosa, and our marketing manager, Andres Calvente.

As a result of the COVID-19 pandemic and the impossibility of researchers to continue to carry out labs studies, at the University of Liverpool, a robot that was normally used in automotive factories was reprogrammed to test samples and perform experiments, being controlled remotely by researchers who were complying with measures of isolation and working from home.

The equipment is similar to the arms used in automotive factories, but the difference is that they have more artificial intelligence, which allows them to decide what to do next without the help of humans.

Under the impacts of all events that happened in 2020, an issue that had already been discussed for some time returned to the agenda: how is the future of work in an AI world?

Although it sounds scary to some, it is important to remember that artificial intelligence does not come to replace. But to assist and improve ordinary tasks that would normally take up a lot of workers’ time. Time that could be used to execute other tasks.

Nevertheless, there is some resistance on the side of the companies to get  the most out of this technology. According to a report developed by  McKinsey 2020 about IA, only 16% of the ones who had taken part of the research were aware and using deep learning in their own benefit, and most of them from High-Tech companies.

That is why it is so important to use artificial intelligence tools that give confidence and guarantee the quality of service for those who are taking the technology onboard. Alana has different skills that can assist in a fast and personalized way the daily task of your team.

Customer support in app stores: Is it any worth automating?

Advantages of the business automation: from commercial to customer relationship